Video: The Women Of The Movement

Courtney Place and her teammates strolled into the gym, anticipating the high-stakes competition ahead. Though only a seventh-grader, Place was chosen to compete in a high school varsity basketball playoff with girls nearly five years older than she was. Though young, Place ignited the court, but fans of the opposing team didn’t see her speed, her strength or her agility.

They saw her feet.

And the chants began:

Place said that, as a seventh-grader, her feet were larger than those of other girls her age.

The next year, Place’s team returned to the same gym to face the same school. Mid-warm up, Place detected familiar voices:

“At the moment, I didn’t show that I was hearing them or anything, but I did,” Place said. “It really affected me because I felt like I couldn’t be good at sports and be a girl. They were saying that because I was good, I had to be a guy.”

Fast forward and Place is now an NCAA Division II volleyball player at Augustana University. After her junior season, during which she led the team with 449 kills and earned second team All-American honors, Place committed to competing on a U.S. volleyball team in Brazil. Additionally, Place was invited to play volleyball in Croatia–where recruiters would be scouting potential professional athletes.

But, no one would care anyway, Place thought back in January as she contemplated traveling across the Atlantic. Nobody really watches professional women’s volleyball.

“It’s not really fair, because then I thought about people who I have looked up to in professional sports, and they have mostly been male,” Place said. “The media just doesn’t show female athletes as much as male athletes.”

It’s true; according to the documentary Media Coverage and Female Athletes, women comprise 40 percent of all athletes yet receive only four percent of media coverage.

Upon discussing this misrepresentation with her teammates, Place discovered something striking: the women she had served, sweated and smiled with for years had had similar experiences. They also saw a lack of female athletes in the media. They also had predominantly male role models.

They also were “Big Feet.”

No longer would Place and her teammates endure the ways in which they were treated; they wanted to be seen. Out of this discussion, a movement was born: SEE US. On its Instagram page, Place defines SEE US as “a movement to spread awareness about female athletes being underrepresented, suxualized, and judged based on appearance rather than ability.” 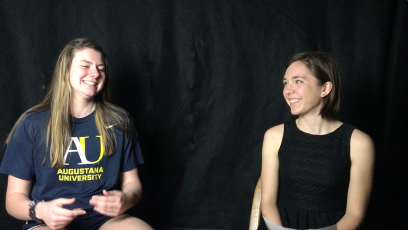 “I definitely didn’t think it was going to blow up as fast as it did,” Place said, laughing. “And when it did, I kind of had an anxiety attack.”

Between studying, volleyball conditioning and managing an exponentially growing movement, Place was overwhelmed. So, she turned to Augustana faculty members for advice–including professor Katie McCollough, whose past research reflects the relationships between gender and media.

Oh my gosh, this must be taking up so much of your time, and you need to delegate, McCollough said to Place. Don’t say no to help at all.

Overall, McCollough thought that Place was “really on to something,” but she needed to rethink her execution of SEE US; by doing so, Place would maximize the community she built while simultaneously relieving the anxiety that had quickly taken over her life.

“[They needed] to not just use the one-point person, but form more of a collective that can get together and talk and be a team,” McCollough said. “[After all], they’re all people who are good at being on a team.”

So, when teammates Jessica Simon, Kaylea Ahrens, Hanna Justesen and Kathryn Nasby offered to help with the movement, Place allocated responsibilities such as sales management and general support.

The women were eager to assist; it was a movement with which they all resonated.

“In high school, we would always try to promote our games and tell people to come, and guys would always respond with things like ‘I’m only coming for the spandex,’” said Simon, who manages SEE US merchandise sales and donations to the Women’s Sports Foundation. “Volleyball players and all other female athletes put in an incredible amount to time to their sports, and people should support them for their athletic achievements and not demean their hard work by placing emphasis on their physical appearance.”

Simon said that though she focuses on apparel and donations, all of the women share responsibilities, working “collectively to make the movement happen.” Place oversees the movement in general and runs the SEE US Instagram and Twitter accounts–which have further expanded the movement’s reach.

“I first found out about the movement through social media,” said Erin Slinde, volleyball player at West Virginia University. “Some girls that I had played with in club had joined it, and so when I saw their posts about it, I looked more into it and thought it was a really great thing that I wanted to be a part of.”

“I’m so happy Courtney took the initiative to step up and give us a voice,” said Mack Uter, who plays basketball for St. Cloud State University. “Too many times, I’ve seen amazing athletes be brushed off just for being female or even be ridiculed for their abilities and being called a man. This movement is incredible and I consider myself blessed and privileged to be a part of it.”

“The first step in addressing inequality is to increase awareness for the problem at hand,” said Madie Kroehler, volleyball player at the University of St. Thomas. “The SEE US movement is doing just that, and by joining I hope to help create a more inclusive and representative place for all future athletes.”

Unfortunately, these women have also experienced their fair share of gender-based judgment and negative comments. As a twelve-year-old, Slinde said that she was nicknamed EHAP–Erin Has A Penis–by boys in her grade who were jealous of her fast mile times.

“It was extremely humiliating, but I never really took it that hard,” Slinde said. “Looking back at it now, I can’t believe how I just didn’t let it affect me because that was pretty brutal, especially for a twelve-year-old girl.”

“I’ve always been a positive, bubbly person,” Kroehler said. “From a young age, my coaches often told me that to be a competitive athlete, I had to be less like that, that those qualities were girly and wouldn’t win games. The number of times I was told to ‘man up’ in the face of adversity is ridiculously high.”

Each personal story is a solid brick; glued together with other bricks, they comprise the foundation upon which SEE US was built. Personal stories, often accompanied by Instagram posts braving the movement’s logo, glue SEE US members virtually. Now, Place wants to connect its members face-to-face; during the summer, SEE US members plan to meet for dinner, a photoshoot and a discussion about future goals of the movement.

Brick by brick, level one has been created.

Place plans to build higher, talking to high schools about the representation of female athletes. Women–like Place–traveling abroad for sports plan to don SEE US apparel in other countries, extending the movement worldwide. Recently, Place and six teammates were invited to speak at a Spartan Race–an infamously challenging obstacle course drawing in gritty athletes.

Out of the bricks is arising a tall building, multi-faceted and strong. Despite its humble beginnings, the building is ascending at an exponential rate.

And this skyscraper will be seen.