NEDA Week: Spotlight On Body Image In The Running Community

A few days ago, I messaged several female distance runners I know–high school, collegiate and post-collegiate–about contributing to a blog post for National Eating Disorders Awareness Week. Unfortunately, eating disorders and negative body image are prevalent issues in the female running community, so I wanted to provide an honest post with perspectives from real female athletes, hoping to raise awareness about these issues and encourage discussion. That is–of course–my aim for this blog: to tell what a runner’s life outside of running is genuinely like. When I sought out athletes for this post, I was hoping to get four, maybe five responses at most.

Unfortunately, I was unable to integrate each person’s honest, beautiful response into this post, but I would like to extend a million thank yous to everyone who responded. I hope that the passion in each woman’s response–present or missing from this post–will start conversations.

The sheer quantity of responses says a lot about where the running community is headed; as time goes on, and more people begin speaking out, we increasingly recognize the importance of spreading awareness about the existence of eating disorders and negative body image among female distance runners.

However, our recognition of these issues doesn’t make them go away. We are responsible for changing this culture and, most importantly, offering love and support for our friends and teammates who may be struggling. If you or someone you know is battling an eating disorder, visit the National Eating Disorder website’s support page and reach out to a trusted friend, family member, or healthcare professional.

I love running: the flood of endorphins, the thrill of competition and the supportive network of athletes with whom I am blessed to compete. Still, the nature of this sport sometimes breeds unpleasantness. Though the myth is not supported by research, many distance runners find themselves in a comparison trap, believing that thinner equals faster.

“Being around distance runners means usually being around a lot of skinny, super in shape people all the time, and naturally it’s hard not to compare yourself,” said Mekenna Frederick, runner at Lincoln East High School. “With running in sports bras and spandex a lot of the time, it’s hard to feel completely comfortable in your own skin while being completely exposed.”

“There is a negative perception that only thin athletes are good,” said Emily Berzonsky of South Dakota State University. “I know the stereotype isn’t necessarily true, yet oftentimes, when I am about to race, I size up my competitors by their bodies. I assume that those who are thin and toned are most likely better than those who are not.”

“Many runners believe in the thin to win mentality,” said Rita Schnacker of Wichita State University. “Many runners, myself included, get caught up in the trap of believing that the lower their weight, the faster they will run and are constantly comparing their bodies to other successful distance runners to try to look more like them.”

“For the longest time I thought that if I was as small as I could be, I would be faster, because all of the fast girls were so tiny,” said Kendra Schoening of Wichita State University. “But once I tried to achieve that, I just ended up with stress fractures and felt weak and tired. I also would get sick a lot more easily.”

Schoening said that she “grew up a lot” during her recovery, though she hoped no one else ever has to go through her experiences.

“Every body is different,” Schoening said. “I can’t compare myself to the girl next to me. I might even weigh less than her but look totally different. And my mom always told me that this body has taken me so many miles throughout the years, and I should love it for doing so.”

University of Nebraska-Kearney’s Abby Burke also opened up about her former beliefs about the relationship between diet and speed.

“I started to notice how defined and muscular distance runners were around fifth grade, and I quickly started to think that the only way to achieve that body structure was to eat less and train more,” Burke said. “As I’ve gotten more into triathlons and college running, I ran into trouble. I wasn’t fueling my body enough and got hurt a lot. I had to adjust how I was treating myself and seeing my body as a whole.”

“It is usually true that if you have lose weight, you have less to carry while you run and you do see improvements,” Seivert said. “However, this can only go for so long. You see instant success, but the long term effects are dangerous. All too often, runners focus on that first phase and don’t realize the true harm they are doing to their bodies before it’s too late.”

Fortunately, top female runners have recently begun to speak out about body size stigmas. Burke–along with several other women I messaged–mentioned Oiselle as a standout brand campaigning for women of all shapes and sizes. Particularly, elite runners Allie Kieffer and Lauren Fleshman have recently advocated for acceptance of all body types through social media posts. 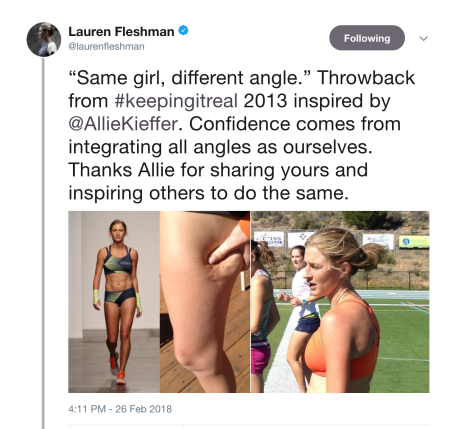 “I feel that when professional athletes speak about their struggle with body image issues, it gives runners the ability to realize lots of runners–even the fastest–go through [the same struggles],” said Alex Schwartz, runner at Lincoln Southwest High School.

Seeing professional runners speak out, and recognizing an overall need for body image conversation, many of the athletes I messaged noted the positives of talking with their own teammates about these issues.

“It really is just nice to be able to talk [with your teammates] about your struggles with body image and have people who not only relate to you but can support you and tell you that you don’t have to have the ‘ideal’ runner body to be successful,” said Abby Volkmer of Lincoln East High School. “Having a team and close teammates who value each other as people and not only as runners that can win meets also is important in my opinion.”

“My group of girls hypes each other up and tell each other that we look great,” said Gabby McGinn of Millard West High School. “But, we all also get carried away with eating healthy foods and the new healthiest trends sometimes, so it’s good to ask questions and talk about concerns with your running group, because they’ve probably had a similar experience.”

Finally, I received incredible suggestions for ways in which we can improve our outlook and minimize the “thin to win” myth.

“When young girls are conditioned to only seeing one type of body in advertisements, they start to believe that the only way to be healthy and athletic is to look like that,” Czapla said. “They identify their athleticism based on what they look like rather than what they are capable of.”

Additionally, many runners said that conversations about nutrition and proper fueling should start with coaches and athletic trainers. Particularly, Berzonsky said that these people “may be a critical step in prevention” of eating disorders.

Moreover, offering love and support for teammates was a suggestion offered by almost all of the women who contributed.

“I think [decreasing the culture of comparisons] is something that will naturally happen,” Frederick said. “But, we could strive to embody more body positivity within the running community by spreading more love verbally and continuing to embrace runners who maybe don’t fit the ‘skinny’ or ‘small’ distance runner body type.”

As was mentioned by many of the women I messaged, the distance running community encompasses open, loving and compassionate individuals.

Let’s use these strengths to change our culture.