And then there’s Augustana and USF.

When only a street separates two colleges, a tense rivalry is bound to form. Across all sports, a head-to-head competition between USF and Augustana isn’t just a game–it’s a battle for the city.

Then, USF runner Steven Brown did the unthinkable and reached across the formidable 26th street divide.

Steven led a Bible study for his track team at USF. Augustana runner Leah Seivert led one for hers. In a message to Leah early this spring, Steven offered to merge the two groups for a weekly evening of fellowship.

“I figured that this would be a great opportunity to build relationships with our neighbors,” Steven said. “And with these relationships, maybe we can help each other in our walks with God.”

Leah was more than willing to seize this opportunity.

“When Steven asked me to do the Bible study with them, I was so excited,” Leah said. “It’s really neat to get to know our competitors at a different level beyond what they do on the track.”

Last Monday, the bond was officially formed. The other Augustana runners and I piled into two cars and drove to Steven’s house–the location of our first fellowship night. Though my teammates and I were so excited that we arrived nine minutes early, we were immediately welcomed into Steven’s home.

We began with the usual college student introductions: name, grade, major and hometown. Then, Steven and Leah each shared their testimonies–how the ups and downs of their walk with God exemplify His power, love and grace. Testimonies both show God’s true nature and bind us as Christ followers, making testimonies crucial to establishing a community like this one.

“Both groups of us are for the most part going through the same trials,” Steven said. “We all experience the highs and lows of distance running, the stresses of being a student-athlete and [we’re] all followers of Christ.”

Of course, the testimonies were followed by a tense Family Feud tournament, in which each of the teams comprised equal parts Augustana and USF athletes. Sadly, my team (The Schrutes) did not win, but our enthusiasm for the game incited connections. Today’s post-testimony activity, Telestrations, also incited connections; we laughed with one another as ridiculous drawings and guesses were unveiled. 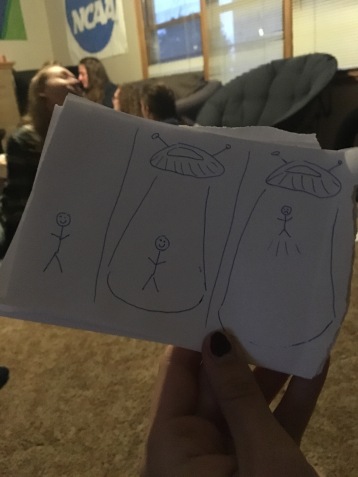 My attempt at drawing “A UFO Abduction” 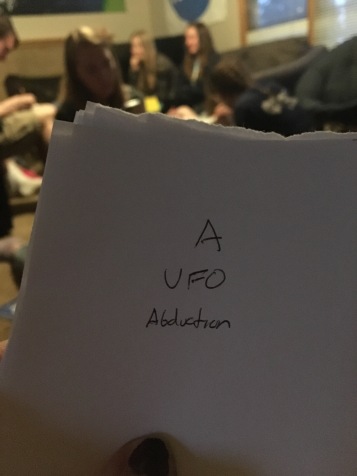 In an earlier post, I mentioned that when I competed in high school, I loved forming friendships with runners across Nebraska. Prior to this fellowship, I had missed this aspect of high school sport. In high school, I looked around at the starting line and realized that I was surrounded by both competitors and friends. Yet, when I began competing in college, I didn’t even know the runners who lived across the street.

But this is finally changing.